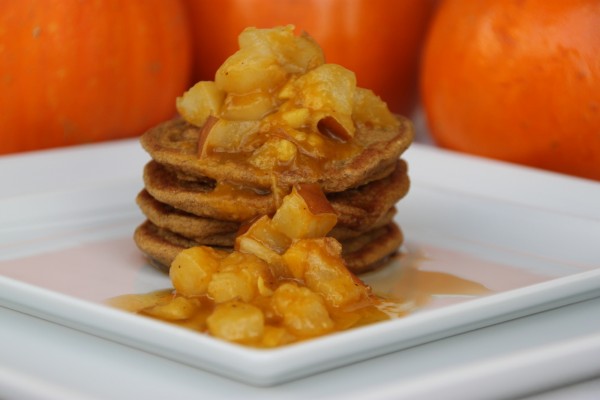 I’m no stranger to pumpkin pancakes. Waffles are my husbands favorite brunch food but since we don’t have a waffle maker, pancakes top the list!  I make pumpkiny spiced ones (a few times) every Fall, and have a great pumpkin quinoa pancake recipe published on MindBodyGreen. This past weekend I went to make a batch only to discover I was fresh out of quinoa flour! Oh no! Not to worry though, my Vitamix and some organic sprouted rolled oats came to the rescue! After a little experimentation, it turns out you don’t even need to blend the oats first. What could be easier?

In case you are wondering, BOTH versions are fabulous… as are the ‘green’ pumpkin pancakes I made too (same recipe below but with a handful of kale or spinach!). I made them on the weekend but like all recipes, I like to make once and eat 2-3 times. Since I purposely made more, there were leftover for Monday too! My daughter was late to preschool that day because she wouldn’t stop eating them (she must have had at least 4 pancakes!). True story. 🙂 My husband and I were happy with them too (we added maple syrup to ours and walnut butter to hers!).

I like to go the extra mile (totally optional!) and while my ‘cakes are cooking,  throw some pears (this time it was Bosc – they were organic and on sale!) in a pot with some of the leftover pumpkin puree and fresh ginger (have apple cider? toss a few pours of that in too!) for an out-of-this-world pear topping to accompany the pumpkin pancakes. It makes a total fall party in your mouth!

It’s the perfect fall weekend brunch food. Add a cup of tea or mug of an almond chai latte and that is the making of a brunch happy camper!

I’d always love hearing from you! Let me know what you think of this recipe below! 🙂

Top top it all off, I strongly recommend my Pear/Ginger topping found here! 🙂