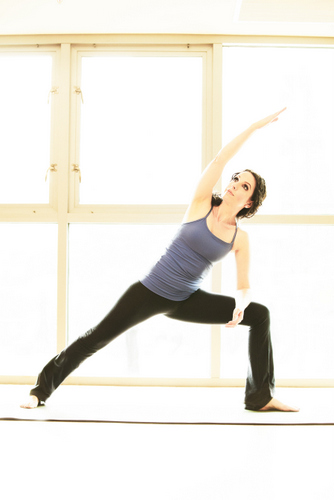 Did you know that September is National Yoga month? To me, it doesn’t matter the month, I love doing yoga!

Yoga is a huge part of my life. It’s actually the first time I lied professionally AND it got me my SAG card! I was living in LA and got a call from a casting director looking for models who did yoga for a new Harrison Ford & Josh Hartnett movie. She wanted to know if I did yoga. “YES!” I said, right away! Just hearing those actors names got me so excited, I honestly didn’t process what she said. After we hung up, it struck me. Uh oh, I just lied and told her I could do something I had never even done before!

At the time I was a massage therapist at the Sports Club LA so the next day, I worked out a private session with one of the yoga teachers there. During our session she asked me how long I had been doing yoga. I looked at the clock and said, oh, about 34 minutes now! 🙂 She was amazed I hadn’t been doing it for years! As it turns out I did have yoga training, I just never knew what it was called.  In my voice and movement classes at NYU Tisch School of the Arts, we did a lot of yoga poses but never called it ‘yoga’ or used the sanskrit names. They knew that for an actor, yoga helps you get more comfortable in your body. It also helps strengthen your body and keep your mind sharp and focused for challenging roles!

Anyway, after my one yoga session with her, I went over to Sony Studios. We shot 14-hour days, with super hot lights in an even hotter studio hanger. Many of my fellow actors gave up and left after several hours of non-stop yoga. One woman even fainted! I was having a blast though, and could have easily done it longer (of course, having Josh Hartnett play the super-hot yoga instructor didn’t hurt!). Ever since that day, I was hooked. I’ve found yoga studios in every city I’ve lived, and on most of my trips or vacations. I did yoga all through my pregnancy, and post-partum too! 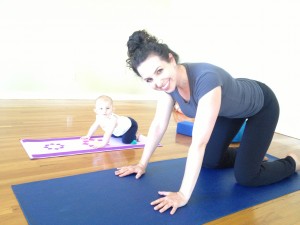 It was a natural transition that I included my daughter with my yoga practice. She joined me at classes from the time she was 9 months old. She can do “happy baby” or “downward dog” all by herself, too! She’s in a nursery school that does Yoga every Tuesday, and I’m so excited for her to pick it up with her friends.  For children, yoga helps calm and focus them, and getting them started with a yoga practice early on sets them up for a lifetime of healthy success!

There are so many types and styles of yoga to choose from. Here are just a few of my favorites:

So what’s the moral of this story? Yoga isn’t some arcane thing reserved only for crunchy-granola hippies or spiritual gurus. It can be an easy, fun practice for people of ALL ages and backgrounds. You can do it at home with a DVD or online stream (like Jess’ Dirty Yoga or Elena Brower’s YogaGlo page) , or take a class in your area. Get the family involved, ask a friend to join, or go solo. Whatever you choose, just get out there and give it a try!