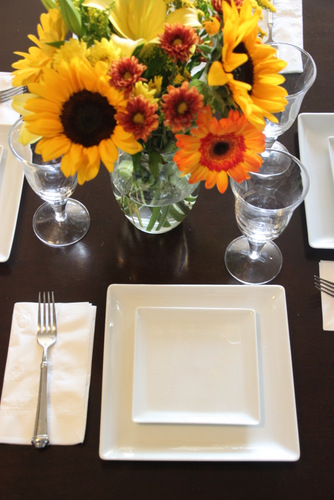 A friend and colleague recently asked about alternative ideas for celebrating Thanksgiving, focusing still on gratitude.

I LOVED this question because it brought to my awareness something I had been doing unconsciously with my family.

Whether you have a totally traditional Thanksgiving day but want to broaden your celebration, or don’t buy in to the Pilgrims & Native Americans narrative at all and are looking for ways to re-focus on a “gratitude” day, I think some of these ideas might appeal to all. If you have a family or are single, young or old, family near or far from home…. Gratitude is always a good idea!

Show your Gratitude by Giving 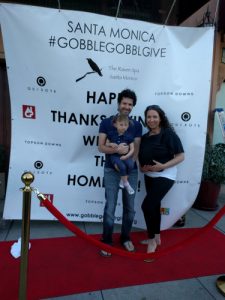 Ever since I had my first child, we started the Thanksgiving day actually giving. In fact, neither of my children have ever known a Thanksgiving without first giving to others. When I said that out loud to someone recently, I surprised myself. I LOVED the idea, but didn’t realize I was even doing it! I really hope it’s a tradition they carry with them.

On erev Thanksgiving, my girls and I make a dish (often my butternut squash sage & penne pasta) for the homeless. Then on Thanksgiving morning, we get up and deliver our home made dish (and clothing/toiletries) to Gobble Gobble Give (in Santa Monica).

Then we come home and watch the rest of the Macy’s Day Thanksgiving Day Parade, which was a tradition in my home growing up in NJ. In fact I’ve even BEEN to the parade with my family (and once had a cousin perform in a marching band in the parade!). When I was pregnant with my first and living in NYC, we even went uptown the night before T-day to see the balloons blown up. I think there are less people at the parade. It was INSANE! So the parade must always be watched or at least ON the television. 🙂

Give the Turkeys Something to be Thankful for 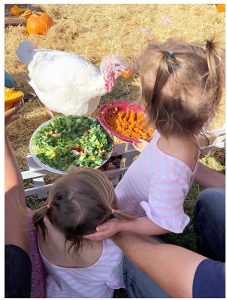 Something new we did this year was feeding the turkeys!

Here are my girls feeding turkeys at @FarmSanctuary‘s annual Celebration for the Turkeys! ⠀

Instead of eating turkeys, the turkeys were the guest of honor and were fed their own Thanksgiving dinner! On the menu just for the turkeys: acorn squash, sweet potatoes and kale salad with cranberries. The girls LOVED feeding them! (And of course seeing the other animals too!)

The birds had a blast, and it was so refreshing to know at least for some turkeys, Thanksgiving is a day to look forward to! We got to share thanks with these rescued ambassadors of the 46 million other turkeys raised and slaughtered each year for Thanksgiving.⠀ 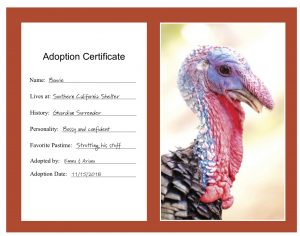 Another tradition we started this year is Adopting a turkey.

Did you know that 46 MILLION turkeys are killed each year for Thanksgiving? Thanks to the @farmsanctuary you can actually ADOPT a turkey instead of eating one! We thought that was pretty cool and the girls scrolled through the turkeys and choose this one, Bowie, to adopt! You can adopt one too! Turkeys are highly social, affectionate and create lasting friendships among each other.

Learn more about how you can help them at www.adoptaturkey.org 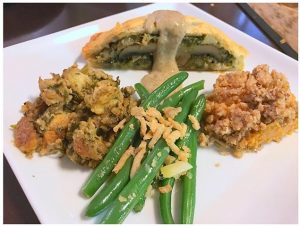 We always have a vegan Thanksgiving, which honors our planet and keeps us from contributing to the deaths of all those birds each year. It’s better for the environment, water resources, your health, and it’s easier than you think! Everyone’s favorite part is the sides anyway, right?

and really ANY side dish can be made vegan easily! My favorites are stuffing (I use my Mom’s recipe!) and green beans with crunchy onions! And don’t forget about the sweet potatoes and mashed potatoes! 🙂

Have an Attitude of Gratitude

And lastly, we always share what we are grateful for. Although we often do this on Friday nights for Shabbat as well. I don’t think you can ever overdue this one or do it enough.

I’m grateful for YOU!
xo